The Stifled Soul of Humankind 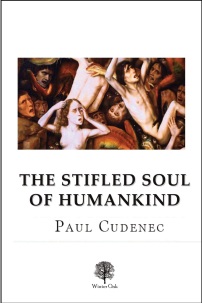 In The Stifled Soul of Humankind, Paul Cudenec depicts a humanity dispossessed, a society in which freedom, autonomy, creativity, culture, and the spirit of collective solidarity have been deliberately suffocated by a ruthlessly violent and exploitative elite hiding behind the masks of Authority, Property, Law, Progress and God.

But he also identifies an underground current of heresy and resistance which resurfaces at key moments in history and which, he argues, has the primal strength to sweep away the prison walls of our diseased civilization and carry us forward to a future of vitality and renewal.

Cudenec writes: “We have to reintroduce ourselves to history, not as observers but as participants. The power that we can rediscover in ourselves is, among other things, the power to create the future. Prophecy brings hope, hope brings courage, courage brings action, action brings inspiration, inspiration brings more determination, renewed hope, deepened courage. Once this magical spiral of revolt has started spinning, it takes on a life of its own”.

A new in-depth article has been added to the orgrad website. Liberalism: the two-headed tyranny of wealth explores the way in which liberalism shares many of its ideological assumptions with fascism and how the two ideologies have gradually reconverged in the decades following the Second World War. “Whenever economic liberalism finds itself under threat from […]