Winter Oak is both delighted and excited to be publishing a new book on anarchist philosophy from writer Paul Cudenec.

In this important work, the author of The Anarchist Revelation, The Stifled Soul of Humankind and Antibodies challenges layer upon layer of the assumptions that lie largely unchallenged beneath contemporary industrial capitalist society.

He rejects limited definitions of freedom as an absence of specific restraints in favour of a far deeper and more radical analysis which describes individual, collective, planetary and metaphysical levels of freedom.

A powerful and tightly-argued work inspired by a profoundly coherent anarchist vision, Forms of Freedom is a potential classic of 21st century revolutionary philosophy. 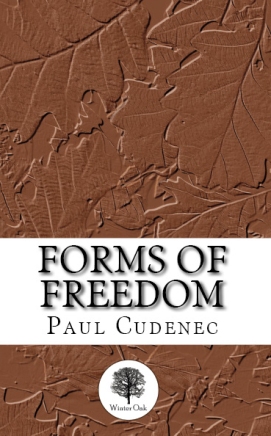 “A collective delusion has taken over humanity, fogged its mind, rendered it incapable of understanding its own essential reality or the way in which it has become blinded to that reality and thus incapable of acting in its own real interests”

X   The fear of freedom

XIII   The desire for freedom

XX   The state versus collectivity

XXI   The criminal power of the state

XXII   Nations and the denial of freedom

XXVII   The reality of nature

XXVIII   The freedom to be real

XXIX   The loss of belonging

XLIV   The freedom to be alive

For more information about Forms of Freedom and our other titles contact Winter Oak via winteroak@greenmail.net

Forms of Freedom is also available from:

BACK TO HOME PAGE

One thought on “Forms of Freedom”