Here is a quick translation of an important piece on the French lundi matin website, close to The Invisible Committee. Radical ecologists call for a convergence with the Gilets Jaunes (Yellow Vest) movement in the struggle against the neoliberal system which is destroying the living planet.

For more than five months now, hundreds of thousands of people in every corner of France have been fighting against the neoliberal steamroller represented with such singular brutality by the Macronist regime.

This revolt, which began on the roundabouts, places of conviviality and self-organisation which at times looked quasi-insurrectional, is part of a history of revolutionary uprisings which have interrupted the course of the prescribed order.

It is a simple fact that the intensity and surprising staying-power of this revolt were born from moments of shared experience, from what you could call the ungovernable “commons”.

In a space which was supposed to be occupied only by the icy waters of the Economy, bearing its gifts of subordination, atomisation, resignation and silence, in a space where we were only supposed to be able to hear the chattering of those in power, of experts and of journalists, long-silenced voices made themselves heard.

It was no surprise that the first repressive measures were aimed at destroying this conviviality by evicting roundabouts, demolishing protesters’ cabins and making it impossible for them to block roads or experience shared empowerment.

Stubborn Yellow Vest resistance was countered by repression of rare violence: Zineb Redouane was killed in Marseilles by a grenade fired by the police; dozens were mutilated, hundreds locked up and thousands charged.

On top of this there was the ultra-aggressive and arrogant propaganda war waged by a media which was almost unanimously against the rebels. After the insults and contempt, after the ferocious repression, after special new laws, they now want to make it acceptable to use armed intervention against demonstrators. To be clear, they want nothing less than to be able to fire on the crowd with live ammunition.

Emmanuel Macron, basking in his historic mission, is going about a reorganisation of the forms of government. In doing so, he is carried by a surge which has come from far away and is sweeping the world: the extension of the fascist elements of neoliberalism.

Unlike historical fascism, this global project does not want to rule the whole world by means of the State, but instead by the Economy, to which all state institutions must be subservient.

We call this approach to governing “liberal-fascist”. It is not fundamentally about state control but about economic control of the world and of our lives in the fanatical aim of pulling into its grasp every single being, every single thing and everything around them.

They will use force and violence against all the runaways and nobodies who resist their world.

Beyond the level of mere words, what real difference is there between Salvini’s Italy and Macron’s France? Does not each of them let thousands of migrants die at sea, when they are not locking up them en masse in detention centres, while criminalising hospitality?

But that’s not all: nobody can pretend not to know that this insane acceleration of capitalism which they are pursuing is also leading to the collapse of our means of living, to the poisoning of earth, water and air, to inevitable climate chaos with unprecedented consequences. 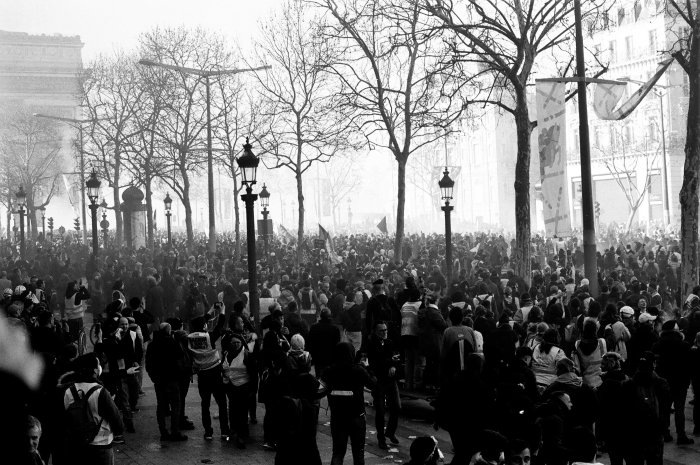 The breathtaking impact of this series of disasters, both existing and to come, has opened the way for new perceptions and realisations in our relationship to the world. And these have led increasingly huge numbers of people to take action, from ZAD eco-camps to climate protests. More and more eco-activists are turning their backs on political parties, those crumbling temples to their leaders’ blatant career ambitions, and are looking elsewhere for answers on the scale of the challenges we are facing.

This deep change in awareness has also seen a renewed attention to words, to what they show us and what they hide. Thus, more and more people are refusing to use the word “Anthropocene” to describe this age of environmental devastation which just gets worse from decade to decade. The term suggests we are all equally responsible and a preferable one is “Capitalocene”. We have to properly identify the systematic and all-embracing force behind this disaster: it is capitalism and its forms of government.

Everywhere we are witnessing a profound crisis in political representation; with the revolt of the Gilets Jaunes like those of the new eco-movements. The happy flip-side of this crisis is the emergence of new communities of struggle, experiments in our ways of inhabiting the world. But here, the question we have to ask is the following: do we seriously think that it is enough to protest for the climate on A to B marches; to launch petitions; to “raise the awareness” of governments? Can we keep on ignoring other forms of revolt which are suffering the brutal violence of the State? Can we really just aspire to be governed a bit better?

Certain organisers of climate marches last autumn now admit it: they “messed up”. And they find themselves a few days later in a police cell like a common Yellow Vest. Too politically inoffensive, trying at all costs to find the vaguest lowest common denominator at the expense of strategic innovation, drawing up lists of grievances for the attention of the authorities rather than challenging the institutions of power. Now eco-collectives are telling us it is time to rebel.

We definitely need to reaffirm communal ways of living; mutual aid, sharing. We need to experiment with new kinds of solidarity and hospitality. And we need to take care of our ways of being in relation to the world. But aren’t these affirmations also, at one and the same time, negations of the dictates of the Economy? As “ecologists”, how can we not confront those who want to rule us in its name?

It is urgent to forge alliances against the disaster which, for the moment, is identified with Macron.

We invite you to join the meeting of environmental organisations and Gilets Jaunes which will be held on Wednesday April 24, from 7pm, at the Théâtre de l’Echangeur in Bagnolet, Paris.

Calls have been made for Saturday May 4 as a day for re-taking the roundabouts, streets and squares, with shared Yellow Vest banquets. Eco-activists should also take part.

2 thoughts on “Green and yellow: our common struggle against liberal-fascism”

A new website has been launched which challenges “to the core” the thinking of the industrial capitalist system. It presents the ideological alternative of an “organic radicalism” which it sources from a wide range of thinkers, past and present. This philosophy, it says, is based on the idea of a living community, a social organism […]