Il fachiro was an Eastern philosopher who arrived in Renaissance Florence in 1459, as set out in a book called Il fachiro di Firenze.

But it soon became apparent that his profoundly egalitarian and anti-bourgeois philosophy was in fact incompatible with the proto-capitalism emerging in Florence at the time and he was condemned as an anarchist.

Watched by mercenary spies, smeared by false rumours and finally ostracised by the Neoplatonist elite, he was effectively written out of the city’s history. Until now.

The Fakir of Florence: A novel in three layers 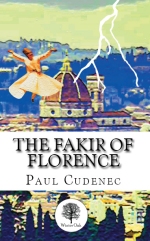 For more information about The Fakir of Florence and our other titles contact Winter Oak via winteroak@greenmail.net

THE FAKIR OF FLORENCE HOME PAGE